Cyber-physical systems (CPSs) are engineering systems that bridge the cyber-world of communications and computing with the physical world. These systems are usually safety-critical and exhibit both discrete and continuous dynamics that may have complex behavior. Typically, these systems have to satisfy given specifications, i.e., properties that define the valid behavior. One commonly used approach to evaluate the correctness of CPSs is testing. The main aim of testing is to detect if there are situations that may falsify the specifications. (more…)

In the development of software for modern Cyber-Physical Systems, testing is an integral part that is rightfully given a lot of attention. Testing is done on many different abstraction levels, and especially for large-scale industrial systems, it can be difficult to know when the testing should conclude and the software can be considered correct enough for making its way into production. (more…)

Temporal logic falsification is a promising approach to model-based testing of cyber-physical systems. It starts off with a formalized system requirement specified as a Metric Temporal Logic (MTL) property. Subsequently, test input signals are generated in order to stimulate the system and produce an output signal. (more…)

Testing safety-related industrial systems is usually carried out on the basis of checklists. A tester has a list of scenarios that he manually applies to the system and checks whether the system behaves according to its specification. Operators behave unpredictably. Their behavior may not be covered by the set of scenarios tested and may lead to dangerous situations. To avoid this, randomized test case generation can be useful (more…)

Sajed Mireamdi, Volvo, presented at the 3rd Workshop on Monitoring and Testing of Cyber-Physical Systems (MT-CPS 2018)

At the 3rd Workshop on Monitoring and Testing of Cyber-Physical Systems (MT-CPS 2018), Sajed Miremadi, project leader for the TESTRON project, presented results developed within SyTeC. These results were also reported at the 14th IFAC Workshop on Discrete Event Systems (WODES), by Johan Eddeland, Volvo.

Cyber-Physical Systems (CPS) are computerized systems interacting with their physical environments. They are prominent in transportation (car, plane, rockets), robotics, internet of things, etc. Control software for CPS has seen a dramatic increase in size and complexity in recent years. (more…)

TuLiP is a collection of tools for designing controllers for hybrid systems from specifications in temporal logic. The tools take as input a description of the system dynamics, a labeling of the geometry of interest, and the desired behavior as temporal logic formulas that describe assumptions about the environment and guarantees to be ensured by control design. Systems with piecewise affine dynamics and environmental disturbances are supported, together with discrete-valued variables that represent the system itself and its environment. (more…)

The design of complex engineering systems is typically structured hierarchically by specifying individual subsystems, and their interaction. We describe a method to algorithmically decompose a given overall system specification into a contract of realizable component specifications that together implement the given specification. (more…) 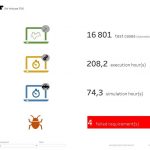 SyTeC has now been part of introducing even more rigorous testing methods in industry. With collaboration in the research project TESTRON, the academically-developed MATLAB toolbox Breach is now being used at Volvo Car Corporation to automatically generate and run test vectors for hybrid and electric vehicle models at the Vehicle Propulsion department. (more…)

Dr. Ioannis Filippidis from the California Institute of Technology, will be visiting Chalmers and specifically the SyTeC project as a guest researcher for three weeks from Feb 11, 2018, to March 2, 2018. During Dr. Filippidis’ visit, the primary focus will be on researching formal specification and automatic test case generation for hybrid systems. (more…) 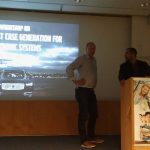 Members of SyTeC participated in the First Workshop on Automatic Generation of Test Cases for Mechatronic Systems, that was hosted by Volvo Car Corporation. This was a workshop supported by the Vinnova-FFI financed TESTRON project, which is adjoint with SyTeC. (more…)

Sometimes software really has to work. SPARK is a programming language, a verification toolset and a design method which, taken together, ensure that ultra-low defect software can be deployed. By design, the SPARK language is immune to many programming language vulnerabilities (such as those listed by NIST/CWE/SANS). Under the hood, the SPARK static analysis tools use formal verification (automatic mathematical proof). (more…)

Jan Tretmans – Model-Based Testing: There is Nothing More Practical than a Good Theory

We build ever larger and more complex software systems. Systematic testing plays an important role in assessing the quality of such systems. The effort for testing, however, turns out to grow even faster than the size and complexity of the systems under test themselves.One of the promising testing technologies to detect more bugs faster and cheaper is model-based testing. (more…)